SEATTLE, WA – Trophy’s Chocolate Guinness Stout Cupcake topped with Baileys Buttercream is back! And this year the luck of of the Irish abounds at Trophy Cupcakes and Party, as this seasonal favorite is available the entire month of March! Not familiar with this rich, boozy St. Patrick’s Day-inspired treat? It’s a decadent chocolate cake made from Valrhona cocoa and Guinness stout, and topped with Baileys buttercream and a lucky sugar shamrock.

Trophy’s Green Velvet cupcakes will make their annual St. Patty’s Day appearance at all Trophy locations this Saturday, March 17 only! What is Green Velvet, you ask? None other than Trophy’s award winning Red Velvet confection gone green — a traditional buttermilk and cocoa cupcake, topped with classic cream cheese frosting that has been tinted green for a li’l luck! Other leprechaun-lovin’ delights available at Trophy include cupcakes decorated with pots-o-gold, rainbows and shamrocks galore! 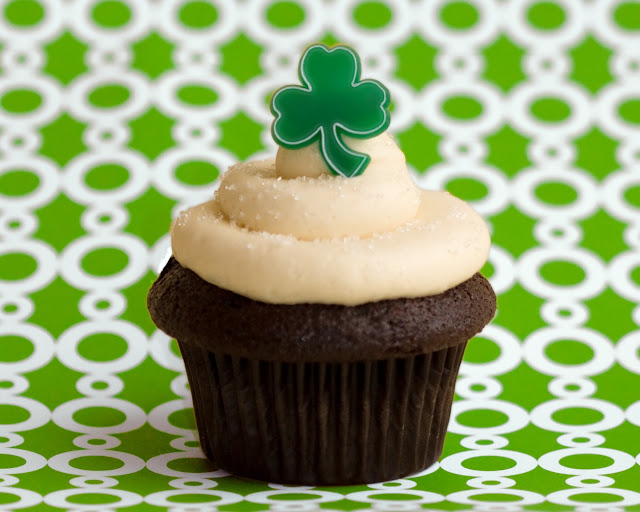 Skip the pub this St. Patrick’s Day and indulge in a Chocolate Guinness Stout Cupcakes topped with Bailey Buttercream! These festive, party-perfect cupcakes can be ordered in advance. For those interested in a Saturday, March 17 delivery, orders must be confirmed by Friday, March 16. And, don’t forget, our Green Velvet cakes are around for one day only! Check us out on Facebook at facebook.com/trophy.cupcakes and Twitter at @trophycupcakes for delivery specials! To schedule a Trophy Mobile cupcake delivery, please call 206.632.7020!