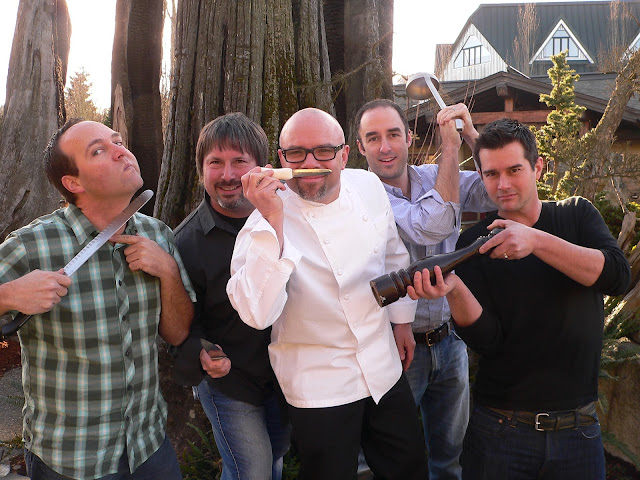 The Iron Vintner Challenge takes place on four consecutive Wednesdays this June, concluding with a Championship Winemaker Dinner at Barking Frog, all to benefit Little Bit Therapeutic Riding Center, whose mission is to improve the bodies, minds and spirits of children and adults with disabilities through equine-assisted therapy.
The 2012 Iron Vintner Challenge schedule is as follows:
June 6, 2012 – Round 1: Jerry Riener, Guardian Cellars vs. Kevin Correll, Barrage Cellars· June 13, 2012 – Round 2: Morgan Lee, Covington Cellars vs. Ross Andrew Mickel, Ross Andrew Winery·

June 20, 2012 – Championship Round: Round 1 Winner vs. Round 2 Winner·
June 27, 2012 – Championship Dinner at Barking Frog: Four-course meal with wine pairings, live auction to benefit Little Bit and chance to mingle with all winemakers
For each round of the competition, which takes place on the patio outside Fireside Cellars at Willows Lodge from 5:30 – 7:30 p.m., attendees will be able to see the action as it unfolds, watching contestants’ cooking techniques, execution and how they react under pressure against their rival. To begin each round, winemakers and their partner will be given a plethora of ingredients along with a secret protein selected by Chef Moore from which to craft an appetizer and an entrée in 60 minutes or less. Celebrity judges will taste and critique each contestant’s dishes and name a winner each week based on three categories: presentation, flavor and creativity.
A Championship Winemaker Dinner at Barking Frog will complete the Iron Vintner Challenge, with a portion of the proceeds benefitting Little Bit Therapeutic Riding Center in Woodinville. Chef Moore will step down from being emcee for the evening to prepare a four-course meal featuring the winning appetizer and entree along with wine pairings from the 2012 Iron Vintner himself, as well as the other participating winemakers.
Tickets for Iron Vintner Challenge go on sale at the end of April and are $50 per person for each elimination round, which includes a tasting from each winery competing that evening. The Championship Winemaker Dinner is $135 per person. For those attendees who want to  stay overnight on the Wednesday evening of the competitions, Willows Lodge will extend a special 15 percent discount on the best available room rate. For additional information or to purchase tickets, please visit www.willowslodge.com.
About Little Bit Therapeutic Riding Center
Founded in 1976, Little Bit Therapeutic Riding Center is a leader in the field of therapeutic horseback riding and the first nationally accredited program of its kind in the Northwest.  Little Bit’s mission is to improve the bodies, minds and spirits of children and adults with disabilities through equine-assisted therapy.  The center also strives to be an inspiration and educational resource to the therapeutic riding profession and was recognized with the Delta Society’s Model Program Award of Excellence for provided outstanding service, while bringing people and animals together. www.littlebit.org
About Willows Lodge
Willows Lodge, a Northwest style lodge located in Woodinville Wine Country just outside of Seattle, features 84 luxury guestrooms, a full-service spa and high-tech equipped meeting space.  Executive Chef Bobby Moore’s American regional cuisine at Barking Frog reflects the seasonal and organic produce found in Puget Sound, and is artfully paired with an extensive list of Washington wines.  Willows Lodge also boasts Fireside Cellars, offering a casual and sophisticated atmosphere tucked away in the lobby with an outdoor patio overlooking the expansive surrounding landscape. www.willowslodge.com.
About Benchmark Hospitality International
Benchmark Hospitality International is a leader in the management and marketing of resorts, conference centers, hotels, and Personal Luxury Resorts & Hotels.  The independent company, launched in 1980, is a worldwide organization operating properties in major metropolitan and resort destinations.  Benchmark’s international headquarters is located in The Woodlands, Texas, near Houston. Benchmark Hospitality is also a founding member of the International Association of Conference Centers.  The company’s eastern regional office is in New Jersey, western regional office is in Washington, with international offices in Tokyo, Japan, and Santiago, Chile. For the location of Benchmark’s properties and additional information, visit www.benchmarkhospitality.com.