SEATTLE, April 11, 2012 – Erik Carlson is thrilled to welcome longtime friend and fellow cocktail innovator, Brooke Arthur, to Seattle. The dynamic duo will be creating drinks together in Bastille’s Back Bar on Tuesday, May 1 from 7pm to midnight.
Arthur, who was named one of the San Francisco Chronicle’s 2009 Bar Stars, is currently the bar manager at Charles Phan’s Wing Ho General Store in San Francisco.
Carlson, who lived in San Francisco before returning to Seattle in 2009, met Arthur when they worked together at the Redwood Room in the Clift Hotel. Arthur was a cocktail waitress at the time, but her curiosity about cocktails intrigued Carlson – so when he left to run the bar at Umami, he brought her along and trained her to tend bar. The rest, as they say, is history. Arthur went from Umami to Range to Prospect before taking on bar manager duties at Wing Ho General Store.

“I’m super excited to pick up where we left off in San Francisco,” says Carlson. “In a new environment, a new city – even if it’s just for one night!”

In honor of her visit to Bastille, Arthur will create a special cocktail menu for the evening. Carlson’s current cocktail menu will also be available for guests to enjoy.
Opened in June of 2009 and housed in an historic 1920’s building in Seattle’s Old Ballard neighborhood, Bastille Café & Bar is a bustling homage to a Parisian brasserie. Owners Deming Maclise and James Weimann scoured Paris flea markets and local salvage stores for vintage accessories to create a truly authentic feel. From the white subway tiles, antique mirrors, and Paris Metro clock to the zinc-topped bar and stunning crystal chandelier that takes center stage in the Back Bar; they’ve truly hit the mark. 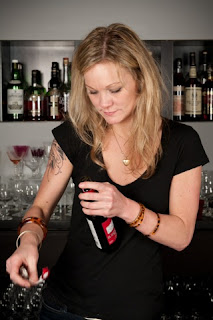 Chef Jason Stoneburner creates French focused cuisine inspired by the abundance of seasonal product found locally—and it doesn’t get any more local than the restaurants 4500-square-foot organic rooftop garden.  The wine list is French focused with a smattering of NW wines and the bar offers an extensive collection of absinthe. Bastille is open 4:30pm to 12am Sunday through Wednesday and until 2am Thursday through Saturday. Dinner is served from 5:30pm to 10pm Sunday thru Thursday and until 11pm on Friday and Saturday.  Brunch is served Sunday from 10am – 3pm. Happy Hour is daily from 4:30pm – 6pm and from 10pm to 12am Sunday thru Thursday.  Bastille is available for private parties. For more information or reservations, call 206.453.5014 or visit www.bastilleseattle.com.
Bastille Café & Bar is located at 5307 Ballard Avenue NW in Seattle, Washington.