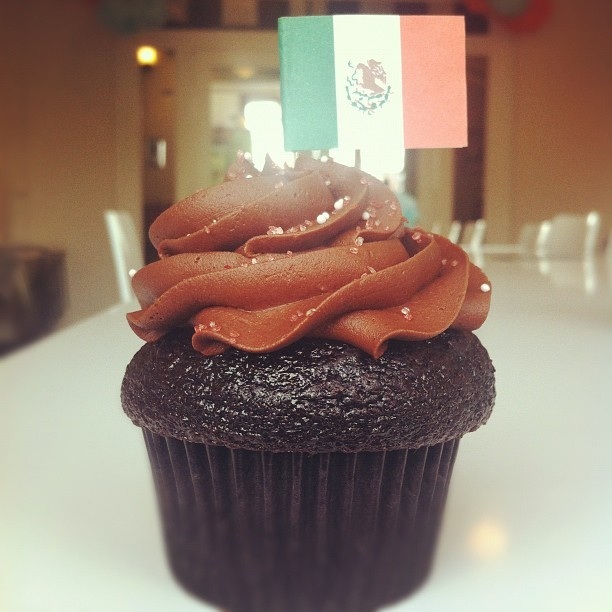 Spring is in the air and Trophy is celebrating with a handful of delicious, seasonal cupcakes! Margarita is the flavor of the month and customers have been lining up for this tart and boozy treat for four years! Trophy’s  luscious lime cake, is packed with lime zest, and topped with a tequila-spiked lime buttercream and a sprinkling of salt — it’s the party-perfect way to say ole!

Another Cinco de Mayo-inspired confection perfected by Trophy is their spicy Mexican Hot Chocolate cupcake. Trophy’s rich chocolate cake is topped with a cinnamon and cayenne-infused bittersweet chocolate buttercream! Mexican Hot Chocolate cupcakes are only available through May 6, so grab `em while their… um, hot!
Celebrate mom with Trophy’s Lemon Raspberry cupcake! This Mother’s Day treat is a fresh lemon cake, made with lemon zest and lemon oil, filled with raspberry jam and, topped with a pretty, pink ruffle of raspberry buttercream and a fresh raspberry. Trophy’s li`l Lemon Raspberry Cakes are only available Mother’s Day weekend.

In other exciting Trophy news, Mother’s Day weekend kicks-off our party-perfect partnership with Molly Moon’s Homemade Ice Cream. Starting May 12, guests will have the option of adding Molly Moon’s ice cream to their menu when they reserve the Trophy Party Room!
For guests hosting their parties elsewhere, they can add Molly Moon’s pints to their Trophy Cupcakes delivery order. That’s right, Seattle best treats in town delivered together via the Trophy Mobile! And, if that wasn’t enough, Molly Moon’s scoop shops will offer four-packs of Trophy Cupcakes on 13 (a baker’s dozen) holidays throughout the year!

Check us out on Facebook and follow us Twitter for all of the latest Trophy news and delivery specials! To schedule a Trophy Mobile cupcake delivery, please call 206.632.7020!

This Week’s Cupcake Curiosities:
#thefiestastartshere this Cinco de Mayo with Trophy’s Margarita and Mexican Hot Chocolate cupcakes!
Trophy’s Celebration four-pack sold exclusively at Molly Moon’s locations will include a Salted Caramel, a Triple Chocolate, a Margarita and a Lemon Raspberry cupcake!
Our summer cocktail cupcakes have arrived! Stay tuned for Pina Colada in June!
Spot Trophy’s founder and cupcake queen Jennifer Shea at this weekend’s Mobile Food Rodeo happening in Fremont on Sunday, May 6!
Taste Deanna’s Tropical Stampede at Trophy locations and at the Mobile Food Rodeo! Created by MFR 2011 winner, this cupcake is a little banana, a little coconut, a little pineapple, some macadamia nuts, and a bit of white chocolate topped with brown sugar buttercream!
Look to celebrate a new, decadent confection from Trophy Cupcakes & Party in June!
We have an adorable Trophy pop-up shop at Pacific Place! Located on the 3rd floor, near Williams Sonoma, our miniature cupcakery is a convenient pick-up location for all chic downtown parties!
Trophy Cupcakes and Molly Moon’s Homemade Ice Cream go together like #cupcakesandicecream and are a #matchmadeinheaven!