Seattle, WA — On a rainy night I was invited to a menu tasting at the newly opened EVO Tapas Kitchen & Cabaret in Capitol Hill. It was difficult to know what was in store for me upon first glance. The restaurant was encased in pine boards, with a stony staircase, and two glass doors that lead to a long hallway. I was met with smiles, energetic music, and a brightly lit main room. I walked past the bar and sat at a booth where I was promptly served with water.

It was an open space, good for events, dancing, and fun nights out on the Hill. However, I was a little confused by the interior decorating, the mixing of stone with red velvet came off a little reminiscent of True Blood. I did love the exposed architecture, especially over the bar, where a big screen was propped upwards in the center. In the far left corner was a stage perfected for live music, which they did have–a female singer, I couldn’t quite catch the name of. 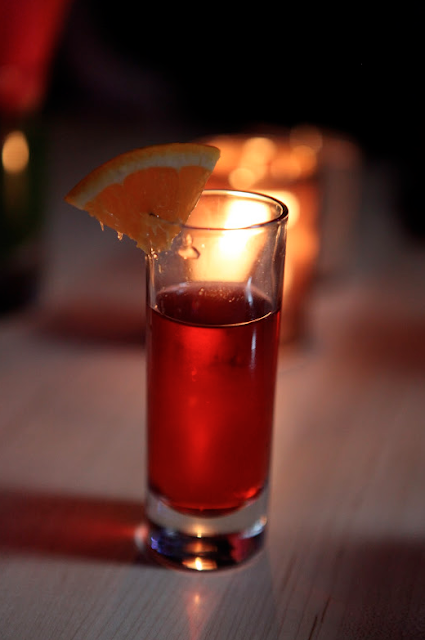 As the event rolled along, waiters danced in and out of tables, carrying delicious bites and refilling glasses that have gone dry. The wine was complimentary and they served both white and red to those who asked. I was also given two tickets for drinks, both of which I gladly used. There were two signature cocktails being served: Virgin Tears made with Don Julio Anejo tequila, amaretto, fresh lime juice, simple syrup, orange zest, and raw sugar and a White Sangria made with dry white wine, peach vodka, triple sec, white grape juice, sugar water, lime, lemon, and orange. Both were delightfully fruity and a must try, especially if you like sangria.
Being a tapas restaurant, they lived up to their name. The bites were small, a combination of light and savoury, great finger food. Not to mention the abundance of them, they kept coming in drones, but after much debate I would have to say that the croquettas were my favorite of the night. 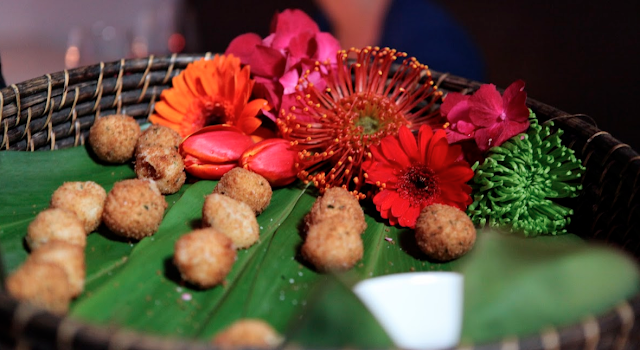 A vegetarian spinach, potato, and pecorino croquettas. The breading reminded me a little of panko, a Japanese bread crumb used to coat fried foods. The spinach and potato combined together to make a soft and savoury center.

A vegetarian truffled popcorn dusted with shaved parmesan cheese and paprika. After a few bites, I couldn’t quite taste the truffle oil, but it was there. A good appetizer none the less. 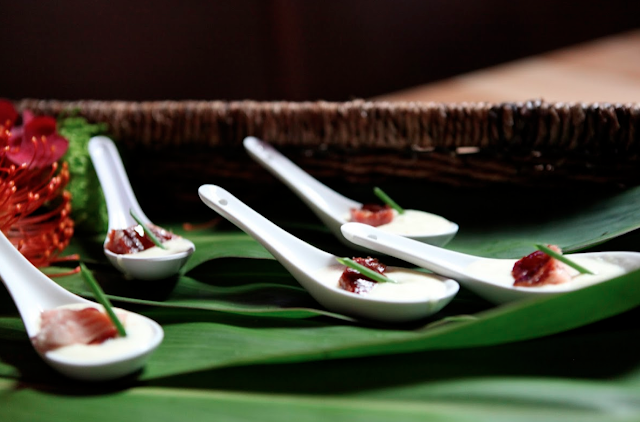 A gluten free herb braised pork belly with creamy cauliflower puree and a jerez oloroso sherry reduction. Another favorite of mine, the cauliflower puree reminded me of a very creamy clam chowder and mixed together with the saltiness of the pork, created a wonderful combination.
Be sure to visit EVO Tapas Kitchen & Cabaret located on 1715 East Olive Way Seattle, Washington 98102. They’re open from 3PM – 2AM daily.

Meet Zooey Ingles / Contributing Foodie
As the graphic designer for Pandazu, Zooey Ingles was looking to add a little more excitement to her schedule. Mixing food and writing has always been a passion, so when the opportunity arose she took charge and grasped it. Don’t mistake her tininess for having an equally tiny appetite, because she – can – eat! Mmm.