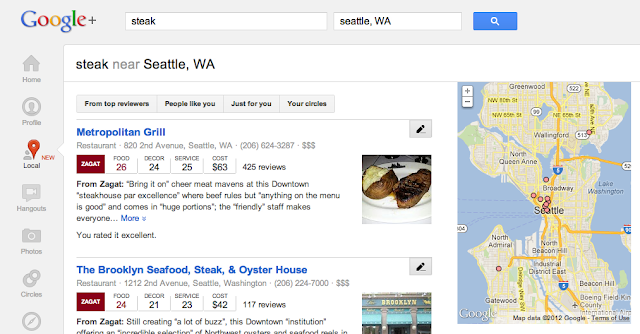 SEATTLE, WA – Google has recently launched a product that integrates both what used to be Google Places and Zagat, now called Google+ Local.  The purchase back in late 2011 has led to something that could be Google’s secret weapon to conquer the local search space.

The product Google+ Local gives users the ability to quickly find recommendations of places based on a category search, from top reviewers, people like you, just for you, and from your circles and let you share them with the people you care about.

“Zagat will be a cornerstone of our local offering,” wrote Google VP Marissa Meyer on the company’s official blog in her post announcing the acquisition of Zagat last September.

The scoring methodology has also been converted to the Zagat scoring model, which gives places a score out of 30 versus the prior 5 star rating scale.  Below is a breakdown of the scoring system.

When you’re searching for locations in Google+ Local, you may see these scores depicted in two ways:
Scores with multiple aspects

“These scores will show you several scores for different aspects of the business. For example, restaurants are scored across three areas–food, decor, and service–with food being the primary aspect.” (Details)
Overall scores

“When we don’t have enough user ratings on different aspects, we will just show an overall score. An overall score is comparable to a score in the primary aspect for a location, like food for restaurants.” (Details)
WIN’s include:
For those who have reviewed on Google Places in the past, you can sign-in with your Google account, click the Local tab, then publish your reviews.  Now, you can get started and review places you’ve been.  To get to the page, just go here.  For other news, you can follow the local Seattle twitter account in the meantime, @GoogleSeattle.
Author: Daniel Jacobi
1/2 culinary enthusiast, 2 parts travelholic, a twist of extreme sports and a dash of creative writing. Daniel Jacobi has a track record of mixing the finest blends of bourbon, cognac and scotch whiskey from various parts of the world. As a mixologist and food connoisseur, Daniel provides readers his point of view on food and the scene. The UCLA alumni plans to continue exploring the world and experience all types of cuisines.