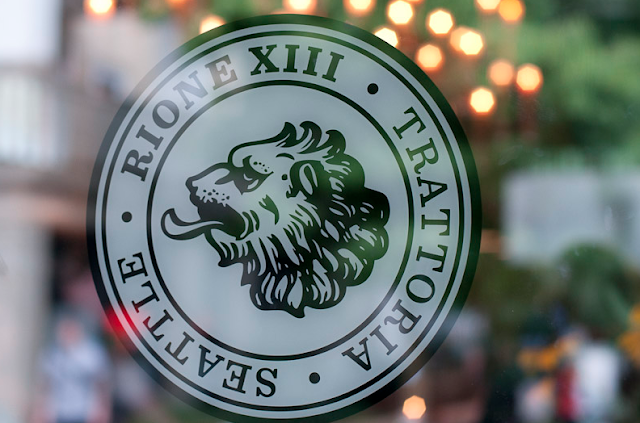 Housed in a 1920’s renovated brick building, Rione XIII has large wood beams, exposed gray brick, clay colored walls, and a polished cement floor. A large open kitchen, wood fired oven, and service area take up the rear of the space while a vintage skylight and large slider window provide ample natural light. A mahogany stained wood banquet lines the south wall and is paired with custom metal and black leather chairs. A handful of small booths run down the center of this 38-seat restaurant with custom-made metal lattice separating the restaurant and bar area. A handcrafted wood bar with 12 seats runs along the north of the space offering guests a birds eye view through the salvaged wood-paned windows and into neighboring spot, The Wandering Goose. Two lighting fixtures are suspended above the bar featuring a collection of beautiful hand-blown glass pendants. A small sidewalk area provides the perfect spot to gather on a sunny day.

Chef duties belong to Brandon Kirksey, who has been running the show at Tavolàta for the last few years. Anyone who has been to Kirksey’s popular Sunday Feasts at Tavolàta knows that he is a fan of whole beast cooking, and he plans to continue that tradition at Rione XIII.
The menu features traditional Roman style dishes, such as Artichoke Fried in the Jewish Style ($9), Sippli ($9), Puntarella with Anchovy Dressing ($11), and Tripe with Tomato and Beans ($12). Pastas include, Tonnarelli Cacio e Pepe tossed tableside ($14), Tonnarelli Carbonara ($15), Bucatini Amatriciana ($14), Mezze Maniche Gricia ($15), Conchiglie Puttanesca ($1), and Gnocchi alla Romana ($14). Roman-style street pizzas include, Anchovy, Squash Blossom, and Mozzarella ($14), Potato, Rosemary and Anchovy ($14), Manila Calm, Zucchini, and Marinated Pepper ($15), and Chanterelle Mushroom, Roasted Garlic, Thyme, and Pecorino Romano ($15). Large plates include Veal Sweetbreads with Artichoke, Lemon, and Capers ($22), Piedmontese Beef Culotte Steak ($25), Veal Chop Saltimbocca ($28), Chicken alla Cacciatore ($22), and Braised Oxtails ($19). Guests can also look forward to a selection of Mozzarella and an antipasti cart with a selection of cured meats, olives, cheeses, and a hearty selection of vegetables roasted in the wood fired oven. Desserts include Tiramisu, Polenta Fritti, and Gelato.

Rione XIII offers a full bar and selection of beers. The wine list is Italian focused with a thoughtful selection of Northwest wines. Sennen David, who in addition to his duties as wine director of Ethan Stowell Restaurants, will be running the day-to-day operations at the restaurant.

For reservations, visit www.ethanstowellrestaurants.com or call 206.838.2878.
Dovetail General Contractors is responsible for the build out of Rione XIII. Amoreena Miller of Strata Architects was the project architect. Henry Walters and Michelle Linden of Atelier Drome handled additional design work, with wood and metal fabrication done by Don Schumacher and Matt Adams at RedSoul.

Ethan Stowell is the executive chef and owner of Ethan Stowell Restaurants in Seattle. His highly acclaimed restaurants include Tavolàta, How to Cook a Wolf, Anchovies & Olives, Staple & Fancy Mercantile, and the just opened, Rione XIII. His food philosophy is all about keeping it simple, using fresh ingredients, and allowing the food to do the talking.
In 2010, Stowell launched Lagana Foods, an artisan pasta line, and began consulting for the Seattle Mariners. His work with the Mariners helps to bring local products into the stadium for fans to enjoy. Ethan Stowell’s New Italian Kitchen was released in September 2010 from Ten Speed Press.

In the spring of 2012, Stowell opened Ballard Pizza Company, the first of his casual “fast food redefined” restaurants from his new company, Grubb Brothers Productions.
Stowell was named one of the 2008 Best New Chefs in America by Food & Wine magazine and has been honored with multiple James Beard Award nominations for “Best Chef Northwest.”

Deeply devoted to his hometown, Stowell is a fervent advocate committed to seeing that Seattle is recognized nationally as a culinary destination. He and his wife, Angela, live in Seattle’s Ballard neighborhood. To learn more, visit www.ethanstowellrestaurants.com.