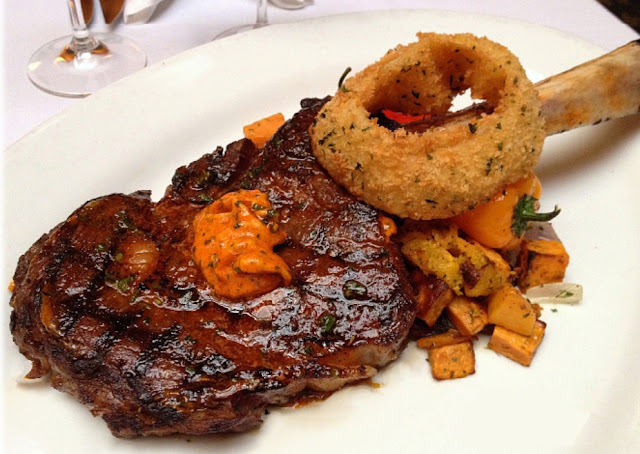 Photo: Seahawk Cowboy Ribeye – courtesy Metropolitan Grill.
SEATTLE— Metropolitan Grill hosts its fifth Celebrity Waiters Dinner to benefit Cystic Fibrosis Foundation (CFF), Washington Chapter.  The Celebrity Waiters Dinner with Seattle Seahawks players serving as celebrity waiters is open to the public.
Autographed server jackets worn by the players will be available at the event as well as autographed items and sports memorabilia.  All proceeds from the items will go to CFF.  The Met will donate a portion of the dinner proceeds from the event to Cystic Fibrosis Foundation (www.cff.org.)

About Metropolitan Grill
Metropolitan Grill has been consistently rated among the top ten steakhouses in the country. The Met is the only Seattle steakhouse offering a comprehensive, global steak program featuring USDA prime from Washington state’s Double R Ranch, American Wagyu from Snake River Farms and 100 percent Australian Wagyu from Mayura Station, all hand-selected by Executive Chef Eric Hellner.

Under the direction of Master Sommelier Thomas Price, Metropolitan Grill has been recognized in Wine Spectator for the “Best of Award of Excellence” and as Washington Wine Association’s 2012 Wine Restaurant of the Year. The Met features one of the largest collections of premium West Coast red wines in the world, including its own signature 100 percent Cabernet from the Walla Walla Valley. In the heart of downtown Seattle, Metropolitan Grill is located on Second Avenue and Marion Street.  For more information, call (206) 624-3287, visit www.themetropolitangrill.com or follow The Met on Twitter and Facebook.

About the Cystic Fibrosis Foundation
The Cystic Fibrosis Foundation is the world’s leader in the search for a cure for cystic fibrosis, a life-threatening genetic disease that affects 30,000 children and adults in the United States, and 70,000 people worldwide.   The Foundation’s mission is to find a cure for cystic fibrosis and to improve the quality of life for people living with the disease. We accomplish this by funding life-saving research and working to provide access to quality care and effective therapies for people with CF. Real progress toward a cure has been made, but the lives of young people with CF are still cut far too short. We urgently need the public’s continued support to fulfill our mission and help extend the lives of those with the disease.