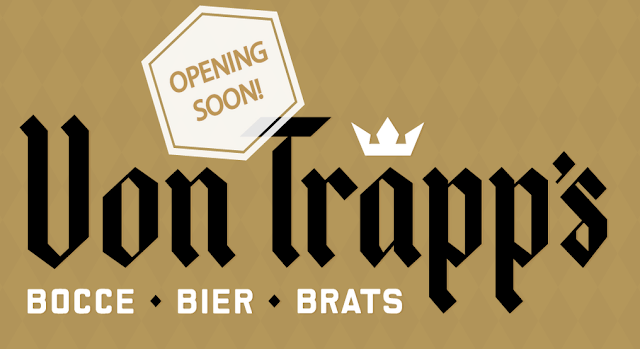 CAPITOL HILL – Von Trapp’s is the latest venture from prolific Seattle restaurateurs, James Weimann and Deming Maclise. Revered for their design aesthetic and attention to details at Bastille Café & Bar, Poquitos, and Macleod’s Scottish Pub, Weimann and Maclise are known for traveling the globe in search of vintage and salvaged pieces to create vibrant spaces. Von Trapp’s promises to bring genuine Bavarian fun to Capitol Hill when it opens its doors at 4pm on Sunday, February 10.

Weimann and Maclise have been thinking about this concept for years and were thrilled to find the perfect space for it last year. They’ve been working closely with Rich Fox and Dustin Watson, who are managing partners at their hugely popular Mexican restaurant and bar, Poquitos. The four will continue their partnership at Von Trapp’s, with Fox and Watson running the show.

“One of the most rewarding parts of being in the restaurant industry is putting together a great team,” says Weimann. “Rich and Dustin are enthusiastic, full of great ideas, and have developed a dynamic and very effective co-management system,” adds Maclise. “We are thrilled to have them as our partners in both ventures.”

Von Trapp’s boasts a colossal bier hall with tall wooden tables and benches inspired by Munich’s famed Hofbräuhaus, plus a back bar, two large mezzanines, and a more intimate “bier den.” Aside from the five indoor bocce ball courts—two more of which will be added to an outdoor patio area in the spring—there’s also shuffleboard and other gaming.

Grand wooden railings salvaged from the McCaw Mansion in Medina lead the way up to the front mezzanine and stunning Viennese chandeliers hang from the ceilings on the main floor. Local elk heads, leather club chairs, booth seating, and a colossal Austrian fireplace complete the “bier den,” and large Belgian doors and pane windows make up one wall of the bier hall. As they did for their other restaurants, Weimann and Maclise went on a scouting trip to five countries, returning home with, among scores of others finds, an entire set of bistro walls from Austria, a Parisian Metro clock, porcelain finials, and inspiration from everywhere from Northern Italy to San Francisco.

Fox and Watson, along with Matt Fundingsland, another member of the Poquitos team, will be dividing their time between the two restaurants. Doug Wargo, previously of Quinn’s Pub, will be the bar manager and brings with him an extensive knowledge of all things beer.

Beer will obviously be central to Von Trapp’s; there will be 25 drafts, half of which will change frequently. The beer selection will be divided 50/50 between European and West Coast beers, and with the selection of bottled beers, there will be about 100 beers total. There are also plans for a growler program and a weekly beer tasting in the “bier den.”

Von Trapp’s chef duties belong to Pete Fjosne, who honed his charcuterie and sausage making skills and established relationships with local purveyors and farmers over the past three years as the sous chef at Bastille under Jason Stoneburner. Von Trapp’s menu features locally sourced high-level Bavarian-inspired dishes and classics such as pretzels, sauerkraut, and sausages, all of which will be made in-house. Fjosne recently spent a month traveling in New York and Germany, researching brats, sausages, sauerkraut, and all things Bavarian.

Fjosne worked closely with Stoneburner on menu development, and the two have been using the ‘Buffalo Chopper’ meat grinder to come up with a standout selection of sausages, as well as house-made sauerkrauts, pickles, mustards, and pretzels. The menu includes a sausage glossary with descriptions and ingredients for some of the more obscure varieties of sausages.

Weimann and Maclise worked with Metis Construction for the build-out of the space. Metis, who also worked on Poquitos, has a great team of talented craftsmen that carefully restored and integrated the many vintage pieces and also built custom tables and benches to complete the look of Von Trapp’s. Amoreena Miller of Strata Architects was the architect for the project.

Von Trapp’s will be open daily from 4pm – 2am, with weekend brunch and weekday lunch hours being introduced in the near future. Dinner will be served from 5pm to 11pm. Happy hour will be daily from 3pm – 6pm, and a late night menu will be offered from 11pm – 1am. Bocce ball courts will be available for hourly rentals, and there are plans for bocce leagues in the future. Dinner reservations are accepted and can be made by calling 206.325.5409 or online at www.vontrapps.com.

A few of the bocce ball courts will accept reservations, and the others will be reserved for walk-ins. For guests interested in reserving bocce ball courts, booking large parties, or private events, please contact Molly Pluger at resevations@vontrapps.com.