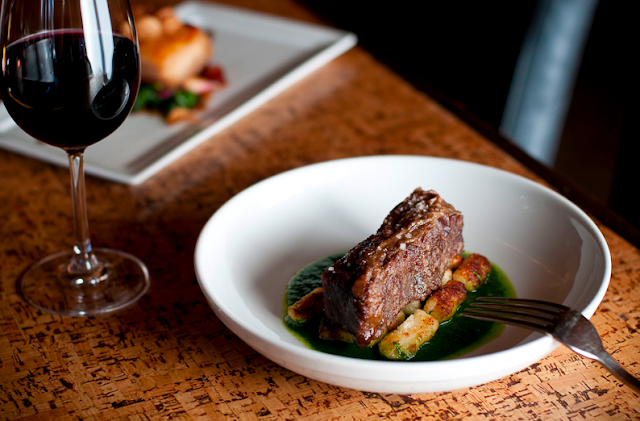 “I’ve wanted to do a small salumi bar for a number of years,” says Stowell. “There was a spot that fell through back in 2008, but I’m glad we waited until now. This space is a perfect size and it has a cool vibe—the new construction gives the room such a modern look—totally different from our other restaurants.”

Located at 1546 15th Avenue, the 1,000 square-foot space features light washed woods, large front-facing windows, and a short row of windows on the north wall that open into Anchovies & Olives. The dining area boasts 20 seats that include a row of small booths painted a high-gloss gray and banquet-seating running along the wall. The tabletops are covered in zinc and the 10-seat natural wood bar also sports a zinc top. The intimate room offers every guest a birds-eye view of the chalkboard with the daily salumi selection, the hand-cranked Barkel meat slicer, and two Wood Stone pizza ovens that make up the open kitchen.

Chef duties belong to Zach Chambers, who is the chef at Anchovies & Olives, and will run both spots. The menu is ideal for snacking and incudes a daily selection of local and internationally sourced artisan meats, a house-made porchetta, pizza, bruschetta, and small plates.

Small plates range from $7 to $11 and include: Roasted Fennel, Bottarga and Preserved Lemon, Corona Bean and Romanesco Salad, Charred Treviso with Cipollini Agrodolce, Roasted Mushrooms with Sage and Strecchino, and Marinated Beets with Sultanas and Pistachios. The bruschetta menu ranges from $8 to $12 and includes: Lardo with Walnuts and Honey, Carne Cruda with Pecorino Toscano and Arugula, Chick Peas with Rapini and Anchovy, and Lamb Tongue with Salsa Verde.

The bar program is cocktail-focused and includes a selection of barrel-aged concoctions. There are even plans in the works for a house-made Limoncello and Amaretto. The thoughtful wine list is primarily Italian with a small selection of NW wines. Justin Rosgen, who is the manager and wine director at Anchovies & Olives, will be running the bar and wine program as well as the day-to-day operations.

Bar Cotto is open seven days a week from 4pm – 11pm. Happy hour is daily from 4pm to 6pm and will feature deals on food and drink. For reservations, call 206.838.8081or visit www.ethanstowellrestaurants.com/barcotto/.

Dolan Built, a general contracting and woodworking company specializing in architecturally designed spaces, is responsible for the build out of Bar Cotto. To learn more, visit www.dolanbuilt.com.

Ethan Stowell is the executive chef and owner of Ethan Stowell Restaurants in Seattle. His highly acclaimed restaurants include Tavolàta, How to Cook a Wolf, Anchovies & Olives, Staple & Fancy Mercantile, and Rione XIII. His food philosophy is all about keeping it simple, using fresh ingredients, and allowing the food to do the talking.

In 2010, Stowell launched Lagana Foods, an artisan pasta line, and began consulting for the Seattle Mariners. His work with the Mariners helps to bring local products into the stadium for fans to enjoy. Ethan Stowell’s New Italian Kitchen was released in September 2010 from Ten Speed Press.

In the spring of 2012, Stowell opened Ballard Pizza Company, the first of his casual “fast food redefined” restaurants from his new company, Grubb Brothers Productions.

Stowell was named one of the 2008 Best New Chefs in America by Food & Wine magazine and has been honored with multiple James Beard Award nominations for “Best Chef Northwest.”

Deeply devoted to his hometown, Stowell is a fervent advocate committed to seeing that Seattle is recognized nationally as a culinary destination. He and his wife, Angela, and young son Adrian, live in Seattle’s Green Lake neighborhood. To learn more, visit www.ethanstowellrestaurants.com.