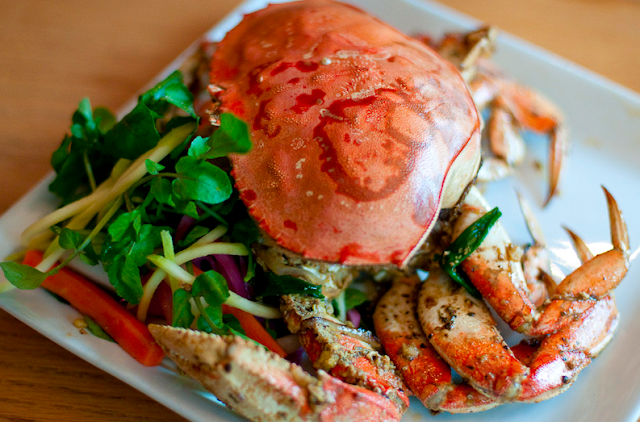 Easter at Monsoon means Dungeness crab all day long. Aside from the regular brunch menu, there’ll be a special on all morning: half of a chilled Dungeness Crab with a brown butter dipping sauce and a Vietnamese salt and pepper vinaigrette for $18. It makes for a celebratory addition to the diverse brunch menu. Brunch runs from 10am to 3pm, and reservations can be made by calling 206.325.2111 or online at www.monsoonrestaurants.com/reservations.

In the evening, the Sunday Crab Feast is on as per the awesome usual: a whole two-pound Dungeness for $30. There’s the traditional Saigon salt and pepper—served with a mango and papaya salad—as well as Singapore-style yellow curry, scallion and ginger, and tamarind variations. And an added bonus: 30% off all bottles of wine on Sunday (and Monday!) nights.

Opened 1999, by sibling chefs Sophie and Eric Banh, Monsoon is acclaimed for introducing modern Vietnamese cuisine to Seattle. Tucked into a quaint Capitol Hill neighborhood, this Seattle gem is widely influenced by the culinary traditions of Saigon, as well as the fresh ingredients of the Pacific Northwest. In addition to time spent in the kitchen, Eric maintains an award-winning wine list. Monsoon is open Monday – Friday from 11:30am –10pm, and Saturday and Sunday from 10am – 10pm. Monsoon offers local lunch box delivery. For reservations or more information, call 206.325.2111 or visit www.monsoonrestaurants.com.