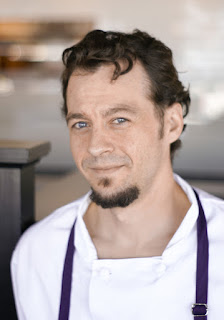 Le Grand Bistro Américain, the authentic French bistro, located on the shores of Lake Washington at Carillon Point, announced today that Shawn Martin has joined the team as executive chef.

Formerly the executive chef at Bis On Main in Bellevue, Chef Martin brings a diverse background of more than 13 years experience. As executive chef, he oversees a staff that delivers a locally sourced seasonal menu with everything made from scratch on site, including an excellent charcuterie program and bread baked twice daily in the central hearth oven.

“I am delighted to join this wonderful young bistro on the rise with such an amazingly wonderful culture and creative kitchen staff,” said Martin. “What attracted me to this position was the opportunity to draw out their talents everyday while showcasing the bounty of our locally stocked raw bar and traditional French menu offerings.”

Chef Martin also plans for the Le Grand kitchen to be viewed as a place for young cooks to learn and train. His goal is to build and maintain an atmosphere that allows him to mentor them to grow and mature in their careers using his kitchen as the platform.

Most recently, Chef Martin was at Bis On Main in Bellevue for more than five years, serving the last two years as executive chef. There, he oversaw kitchen operations and an 18-member staff, while also successfully designing and executing events such as seven-course winemaker dinners for 120 guests. His recipes are also featured in the Bis On Main cookbook.

Prior to that, Chef Martin was sous chef at BluWater Bistro and served in various positions from line cook to executive chef at several restaurants in the Port Townsend area. He has also volunteered as a guest chef at FareStart, was featured in Darigold Fresh magazine, and led several cooking demonstrations at the local farmers market in Bellevue.