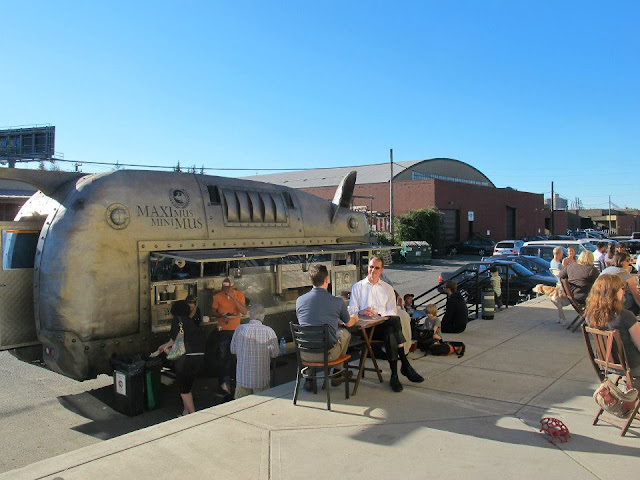 Seattle’s favorite food trucks roll into SoDo for the perfect combination of savory food, great beer and a sun-filled dock at The Woods tasting room

SEATTLE (June 3, 2013) – Two Beers Brewing is excited to announce the return of Food Truck Fridays at its popular SoDo tasting room, The Woods. Each Friday June through August, craft beer enthusiasts can enjoy delicious fare from some of the city’s top food trucks, including MAXimusMiniMUS, Evolution Revolution, Lumpia World and more. With food trucks offering up delicious eats for purchase from 3-8 pm, beer drinkers can choose from up to 12 taps featuring Two Beers Brewing’s unique, handcrafted beer. To sweeten the deal, tasting room patrons who purchase food will receive their first pint of any one of Two Beers Brewing’s year round brews for just $3.

“We’re excited to be partnering with these local food trucks and offer our patrons Food Truck Fridays for the second year in a row,” said Joel VandenBrink, Two Beers Brewing founder and head brewer. “There’s no doubt that the combination of delicious local food, great local beer and a sun-filled patio makes for the perfect end to the work week.”

Kicking off this Friday, June 7, hungry tasting room patrons can plan their Friday trips to Two Beers Brewing around the schedule below:

Open on Tuesday-Friday from 3-8 pm and Saturdays from 1-6 pm, Two Beers Brewing offers pints, bottle, cans, growlers and kegs-to-go in its 4,800-square-foot SoDo brewery and tasting room – The Woods – in addition to being available on tap in more than 500 restaurants and bars in Washington, Idaho and Vancouver, B.C. Two Beers Brewing’s 12-ounce aluminum cans and 22-ounce bottles can also be found at retailers and bottle shops throughout Washington, Oregon, Alaska and Northern Idaho. For more information, be sure to follow Two Beers Brewing on Facebook and Twitter, or visit www.twobeersbrewing.com.

About Two Beers Brewing Co. Two Beers Brewing Co. – makers of Evolutionary IPA and a host of Northwest-inspired beers – began operations in a small Seattle basement in 2007. Today, Two Beers Brewing produces twelve unique beers including five year-round, seven seasonals and a host of intricate infusions in its 4,800-square-foot SoDo brewery. Two Beers Brewing can be found in Seattle-area bars and restaurants, with tastings kegs and growler fill-ups available at their tasting room located at 4700 Ohio Ave. S. in SoDo, open weekly Tuesday – Friday from 3 p.m. to 8 p.m. and Saturdays from 1 – 6 p.m. Select brews can also be found in 22-ounce bottles and 12-ounce cans through the tasting room, as well as local retailers in Washington, Oregon, Alaska and Northern Idaho. For more information, visit www.twobeersbrewery.com.