Skillet will open its fourth restaurant in the new Amazon building at 2050 Sixth Avenue in December 2015. Joining the Skillet family of three food trucks, three restaurants, a catering division, and a line of nationally distributed gourmet food products, the new 1,747 square foot restaurant will have the same neighborhood-diner inspired aesthetic as the Ballard and Capitol Hill locations. A large patio will seat up to 40 guests seasonally for outdoor dining.

“Our food trucks have been roaming the streets of South Lake Union since 2007 and currently serve lunch every Thursday and Friday at McGraw Square. While Skillet is no stranger to the neighborhood, we are very excited to be setting up a brick and mortar restaurant in this rapidly developing part of Seattle’s downtown,” said Skillet President Jon Severson.

“The most important part of our philosophy is to deliver an approachable, delicious dining experience; whether that’s served from a truck or a beautiful new restaurant, Skillet brings the flavor,” adds Skillet Chef Nick Novello.

The menu will feature Skillet’s modern American fare with breakfast, lunch, dinner, and weekend brunch offered. Favorites like the Fried Chicken Sammy, Serious Toast and the Kale Caesar will appear alongside Chef Nick’s seasonal specials prepared with classic technique, using local and seasonal ingredients such as The Golden Beet Chicken Salad Sandwich with poached chicken, toasted walnuts, herbed spicy egg spread, greens and pickled beets on rye bread. A new menu of grab-and-go sandwiches and salads is being developed exclusively for the new restaurant. Designed to provide an anytime destination for neighbors and downtown professionals alike, its hours will be 8 a.m. to 9 p.m. Monday through Thursday and 8 a.m. to 10 p.m. Friday to Sunday.

Skillet has partnered with local firm Mallet on the design and construction with an estimated opening date of Monday, December 14, 2015. 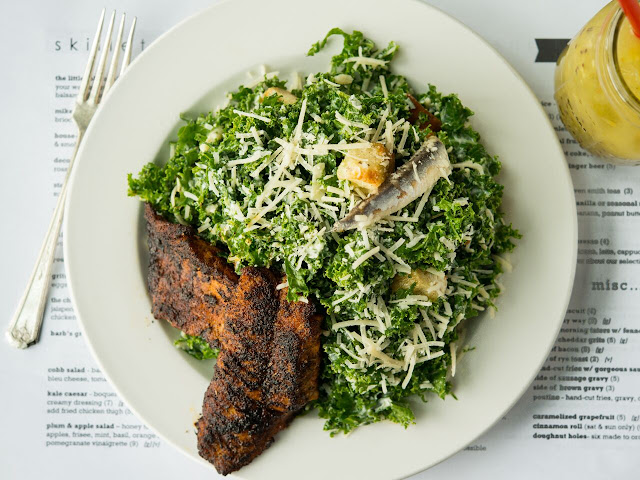