SEATTLE, WA – Get in line as husband and wife head to the streets of Seattle on June 2012 with their Vietnamese and Filipino mobile food truck.  Growing up, Cathy and Romano were constantly surrounded by food.  Their parents had a restaurant for 20+ years, “A Little Bit of Saigon” in the ID, where they sold the restaurant in 2003.  Romano learned the ropes from his mother, who comes from a catering business background of 10+ years, “Violeta’s Catering” where he would regularly help her at events.
Cathy and Romano both share a passion for food and love to entertain and host.  We have always wanted to own our own business.  A couple of years ago, they came up with the idea of a food truck, which was inspired by “Kogi BBQ” in LA.  They thought to themselves, if someone can put Korean flavors into a taco, why can’t we combine Filipino flavors into a Vietnamese banh mi.  They knew that this was an excellent concept, since it’s such a new and modern business for young entrepreneurs.  The name “Xplosive” was chosen because it’s the word that used to describe flavors that you have never tasted before.  ie. “The flavors are explosive!” or “it’s like an explosion in your mouth”. 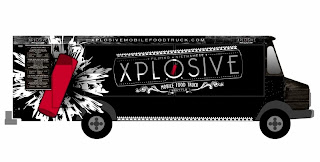 The owners found the used food truck back in August 2010 online in Phoenix, AZ, where they contacted the seller and was communicating with them from November 2010 thru January 2011.  They had made sure they understood the requirements for Washington state L&I and the Department of Health prior to purchasing the truck.  Cathy and Romano are presently preparing for both L&I and the department of health approval.
Currently, Romano works for the Seattle Public Library, and Cathy work for Harborview Medical Center prepping to make their move to their passion and love for food.
SNEAK PEEK at the menu:
From the menu items listed below, you can choose to have it served with our signature “Xplosive” 12″ banh mi, OR a vermicelli bowl, OR corn tortilla tacos: