By Shelby Healy
Forks over Knives fans, vegans and those seeking a healthy yet tasty dining experience rejoice! California-based Veggie Grill has planted itself in Seattle’s South Lake Union. The plant-based menu offers an array of meatless options that will make you ask, “Really? This isn’t meat?”

After being greeted by a very cheerful staff (is it because they don’t eat meat?), I ordered the Santa Fe Crispy Chickin’ and the Sweetheart Fries. Full disclosure: I’m a meat fan and historically have been let down by plant-based alternatives, so my expectations were low to non-existent. However, biting into the fried chickin’ nestled alongside fresh lettuce, tomato, avocado and spicy vegan mayo I was shown meatless doesn’t mean “meh.” The Sweetheart Fries were like any sweet potato fry you would find, so no surprise there, but the vegan mayo provided for dipping was shockingly delicious. I considered shooting the ramekin but decided that would be unladylike and sipped my organic pomegranate green tea instead. 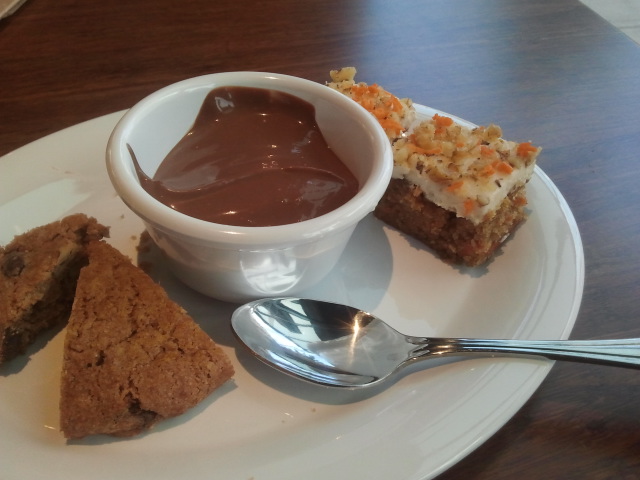 Lunch was wrapped up with a sample dish of cookie, chocolate pudding and carrot cake with a cream cheese-like frosting that made me think they certainly must have magicians in the kitchen because how could vegan frosting actually taste – dare I say it – good?

Veggie Grill will be open to the public for dine-in and take out as well as catering Wednesday, August 22 and will be open Mon-Fri 10:30am to 9pm and Sat-Sun 11am to 9pm. Plans to open in University Village are slated for September. Follow them on Twitter and become a fan on Facebook for more meatless magic.