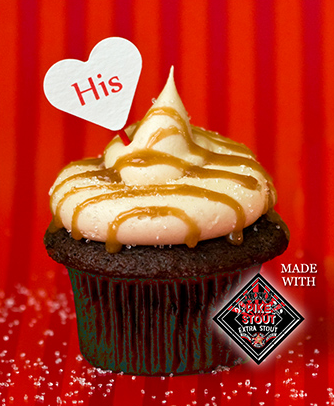 Chocolate Stout Cupcake inspired by Pike Brewing Company
Seattle, WA – Tuesday, Feb. 7th, 2012 – Trophy Cupcakes and Party today announced its partnership with THE PIKE BREWING COMPANY to create “the World’s Best Chocolate Stout cupcake”. Just in time for Valentine’s Day, Trophy will launch its newest Stout Cupcake, now fortified with a generous amount of Pike Extra Stout. Trophy has added Pike’s Extra Stout to its award winning Valrhona chocolate cake recipe and is also whipping up batches of Extra Stout Caramel, a recipe created by Trophy’s Founder, Baker and Party Maker, Jennifer Shea. The Stout Caramel is blended into Trophy’s ultra-creamy buttercream which tops the Chocolate Stout Cupcake…and if that weren’t enough, the cupcake is drizzled with a generous amount of Extra Stout Caramel.
“I am especially excited about our Chocolate Stout Cupcake this year” said Trophy Cupcakes and Party founder and co-owner Jennifer Shea, “It’s an honor to be working with such a legendary, local and family owned business. Pike Extra Stout is my all time favorite Stout with its hints of chocolate, licorice and espresso; it’s the ultimate stout for our delectable Chocolate Stout Cupcake. Our ale cupcakes have always been a hit with the guys…now they can have their pint and eat it too”! According to Charles Finkel, founder and owner of The Pike Brewing Company, “though stout, black as midnight, is sometimes thought of as a manly drink, women are often our biggest fans; I’m sure they will be lining up for it at Trophy Cupcakes locations. Stout and chocolate are a sensual combination.”
Want more chocolate and beer? Find Trophy Cupcakes at the Pike Brewing’s Chocofest, a Benefit for FareStart on Feb. 12th from 6-9pm. http://www.pikebrewing.com/featured_events.shtml
About Trophy Cupcakes and Party
Opened in 2007, family-owned Trophy Cupcakes and Party is a labor of love, operated by husband and wife team Michael Williamson and Jennifer Shea. Trophy Cupcakes and Party are Seattle’s premier cupcake boutiques where careful detail, the finest ingredients and artistry elevate each miniature confection to party perfection. As is evident by being named the Best Cupcake Shop in the 2010 & 2011 Readers’ Choice poll in Seattle Magazine, voted Best Cupcake 2010 by Seattle Weekly, and Best Seattle Bakery and Best Dessert by Citysearch Seattle 2010. Every single element of a Trophy Cupcake, from the European chocolate, Madagascar Bourbon Vanilla and local sweet cream butter to the hand-piped buttercream, French sprinkles and custom decorations, make for an experience that goes far beyond dessert. It’s dessert with a fancy party hat on top! Trophy Cupcakes and Party’s retail locations can be found at Wallingford Center, University Village, The Bravern and all February at Pacific Place. For more information about store hours, daily flavors and special flavors, please visit www.trophycupcakes.com. You can also follow Trophy on Twitter @TrophyCupcakes and Facebook at www.facebook.com/trophy.cupcakes.
About Pike Brewing Company
Charles and Rose Ann Finkel founded the Pike Brewing Company in 1989 in the La Salle Hotel in the Pike Place Public Market. In 1996 they moved Pike to its current location on First Avenue between Pike and Union and opened the Pike Pub. The Pike Pub features traditional pub fare with a special emphasis on local, seasonal, and organic products. Pike Ales, brewed on premise in a gravity flow steam brewery, are featured along with house made pretzels, artisan cheeses, local wines and cocktails using craft distilled spirits. Tours are available upon request. Housed within the Pub is the Pike Microbrewery Museum.
Pike Brewing Company: 1415 1st Avenue, Seattle, Washington 98101, 206-622-6044 http://www.pikebrewing.com/