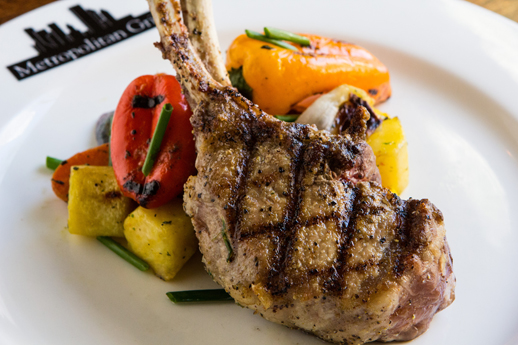 Photo credit: Darren LaMarr/Courtesy of Metropolitan Grill.
SEATTLE, WA – With very limited availability in the U.S., Iberico de Bellota is a “best in class” pork that hails from the government-protected holm oak and cork forests of western Spain.
Metropolitan Grill, Seattle’s classic, award-winning steakhouse, is now pleased to offer the incomparable tenderness, taste and texture of this rare pork to Seattleites.

Known as Pata Negra or Black Hoof, the Iberico is a descendant of the wild boar that once inhabited Mediterranean forests. Today, it is the last free-range, grazing pig in Europe, feasting on a diet of fallen acorns (known as bellota) and wild herbs. This all-natural diet and unique ability to store fat is the secret to its deep earthy flavor and highly marbled meat.
As the Iberico is best served with simple, extremely high heat cooking methods, Executive Chef Eric Hellner introduces it at The Met with a mesquite grilled 8 oz pork chop for $48.
“Iberico is simply some of the best pork in the world and is not easy to get your hands on unless you’re in Spain,” said Hellner. “It has a tremendous amount of marbling to it and a very unique flavor because of the acorns in their diet.”

“I wanted to start off by doing a dish that was extremely simple with just a little seasoning and some mesquite flavor to enhance it a bit so you can really let the natural flavors that it brings stand on their own. As we move forward, we will change it up later with different cuts and sauces and relishes,” Hellner added.

About Metropolitan Grill
Metropolitan Grill has been consistently rated among the top ten steakhouses in the country. The Met is the only Seattle steakhouse offering a comprehensive, global steak program featuring USDA prime from Nebraska, American Wagyu from Snake River Farms and 100 percent Australian Wagyu from Mayura Station, all hand-selected by Executive Chef Eric Hellner.

Featuring one of the largest collections of premium West Coast red wines in the world, including its own signature 100 percent Cabernet from the Walla Walla Valley, Metropolitan Grill has been recognized in Wine Spectator for the “Best of Award of Excellence” and as Washington Wine Association’s 2012 Wine Restaurant of the Year. In the heart of downtown Seattle, Metropolitan Grill is located on Second Avenue and Marion Street.