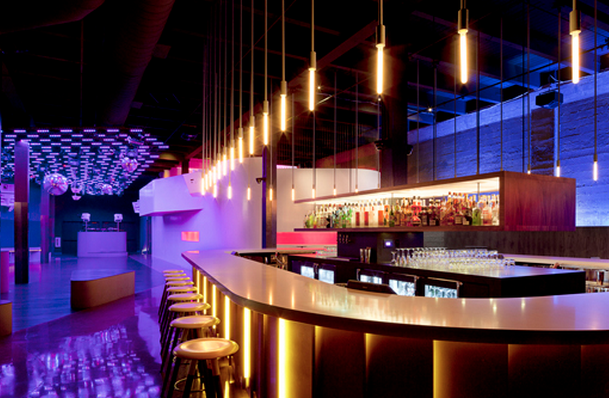 SEATTLE, November 14, 2012 – On Monday, Beatport.comcame out with their list of “The 10 Best Soundsystems in America,” and two month old Q came in at number six. This is a big win for Q and major validation for what they are doing for the EDM scene not only in Seattle, but nationally and internationally.
Q was named along side Smart Bar in Chicago (#10), The Belasco Theater in Los Angeles (#9), Mansion Nightclub in Miami (#8), Monarch in San Francisco (#7), Avalon Hollywood in Los Angeles (#5), XS Nightclub in Las Vegas (#4), Beta Nightclub in Denver (#3), U Street Music Hall in Washington, DC (#2), and Cielo Club in New York in the number one spot.

Several Decibel Festival artists, including Phil Hartnoll of Orbital and Roman Flugel, have commented that Q Nightclub in Seattle is one of the best clubs in America. Boasting Seattle’s only Funktion One system, Q Nightclub is world class across the board. The soundsystem is beautifully integrated into the space, and the volume, clarity, and dynamic range is simply insane. It’s a flown system that would normally comprise several F-1 Dance Stacks. At Q, the system has been suspended from the ceiling and walls with the big bass cabinets installed at floor level, which allows the bass to not only pass across the room above floor level, but also under the sprung dancefloor so that the bass resonates into the legs of people dancing. There are also another 20 Funktion One fill speakers and subs located throughout the club. Need more convincing? Steve Lieberman of SJ Lighting—the dude that’s been doing the mainstage lighting for Ultra Music Festival for more than a decade—designed and installed the dancefloor lighting system.

Q is a Seattle nightclub featuring electronic dance music in a dramatically renovated 12,000-square-foot former auto rebuild garage. Opened in September of 2012, Q has already made a positive impact on the nightclub scene with an array of talented resident and guest DJs, a state of the art Funktion One sound system, world class lightning design, stunning interior, and friendly service staff. Q is open Monday and Wednesday thru Sunday with live DJs, a bourbon bar, and not one, but four disco balls. To learn more, call 206.432.9306 or visitwww.qcapitolhill.com.

Q is located at 1426 Broadway on Capitol Hill in Seattle, Washington